Onion rings on the loose 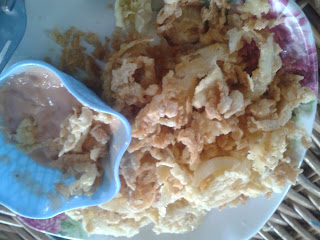 It was a cloudy afternoon for us kids.  So we decided to have crispy onion rings for a snack. We already have the big orange goodness onions, flour ,eggs and salt and pepper to taste and there you have a crunchy onion rings.
First chop the onion slice thinly. Be sure it is in circle shape. Separate some of it. sprinkle some and pepper to taste. Ready with your flour inside  a plastic . Put some onions so that flour will cover all of it. On the other bowl put some eggs . whisk it . Put some salt and some seasoning. After putting the onions on the flour put it on the egg mixture after which  put it back again to the flour mixture. and dropped it on the hot oil. Let it cooked. Cooled. For the sauce mixture some mayonnaise and catsup .Seasoned with salt and pepper to taste.Place it  in a nice platter to served . You have a crunchy onion rings.
Posted by Chloebelle at 11:48 PM

Link Me Back Please!